I’m Chris Robison, and though I’ve been with REVOLT since the beginning, I haven’t had much to do with the blog until now. I’m going to be making an effort to contribute here as much as I can going forward, as we’d like you to see some of the stuff we’re working on.

At the moment, we’re in the finishing stages of a retrofit of lithium batteries into what is actually our very first REVOLT build, a 2002 Saturn SL we did back in 2007. This one had flooded lead-acid golf cart batteries previously, and so we expect a much improved driving experience (and a much cleaner engine bay) once the conversion is done. We’re switchingto 130Ah CALB lithium iron phosphate cells, and keeping the pack voltage around 150VDC.

Recently I’ve been finishing some work I’ve been doing on the battery modules for this car. I came up with a packaging and mounting idea for these and this will be the first installation in which we’ll be trying it. The design is mainly just a variation on the packaging that [optionally] comes with some Thundersky cells, where the cells are squeezed between end plates and everything is tied together with steel straps. My design is intended to make longer modules practical, so I’ve added a clamping mechanism to allow more force to be applied. At the same time, this allows the use of the end plates for mounting the module to a base plate. The cost is some volume taken up by the mounting feet and clamps, something I’d like to reduce in subsequent design changes.

Where the straps on the Thundersky modules are simply attached with screws (how they manage to get them on initially and apply force is unknown, and probably involves tensioning tools), mine go on in a few steps as shown with this 6-cell module which will be located in the front of the car.

this module will be located in the front of the car

First, the clamp brackets are attached to the end plates with small holding screws. Then the straps are strung from one end to the other, at which point they bow around the module loosely.

After the straps are in place, long screws spanning between the clamp brackets can be tightened, which pulls on the straps and exerts pressure across the whole row. 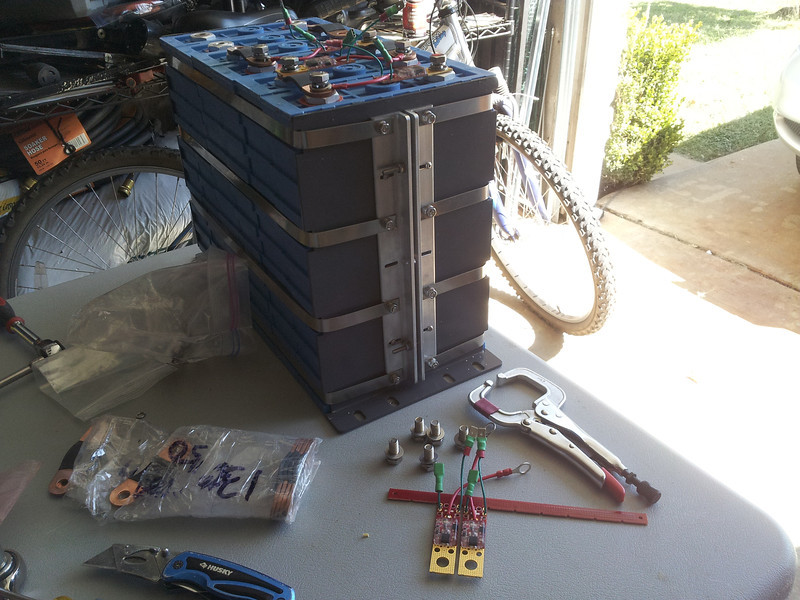 long screws spanning between the clamp brackets can be tightened

In an earlier, similar test design for 100Ah Thundersky cells, I assembled a module of 12 that was impressively rigid along its length, even with very little apparent tension applied to the clamps. Though it’s not shown here, I could even put one end up on a wood block and walk on the cells without any shifting once everything was fully tensioned. a module of 12 that was impressively rigid along its length

Of course, any design will have its drawbacks and limitations, and especially so in its early prototypes and versions. For this design, in addition to the volume taken up at the ends, one notable drawback is that it’s somewhat “partsy”, uses a lot of fasteners and takes some time to assemble. These are areas I’ll attempt to improve on in the future.

This entry was posted in Projects, Saturn Lithium Upgrade. Bookmark the permalink.